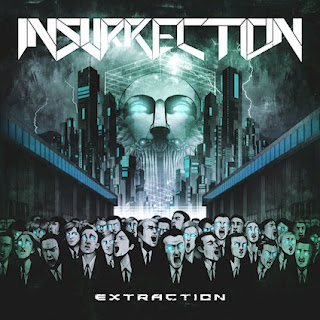 Ëxtraction is the process of removing something, especially by force and it is also the title of the fourth album from Canadian death metal, Insurrection, who are new band to me. Most of us associate extractions with dentists and the removal of teeth, which like listening to poor albums for review purposes is a painful process. Hopefully Quebec band Insurrection can provide some relief after the below average material that has come my way lately.

The album opens much like a computer error. But relax, it's not a mistake, it's just that the song is called "System Failure". The song is actually really strong. The band pummel the listener with fast crushing riffs and drumming with growled vocals. This adrenaline filled opener serves as a warning that a listener is in for brutal attack of the senses. A thrash metal style intro opens "Onward to Extinction", the song slows down to mid-tempo but at times sudden triggers of machine gunning drumming propel the song forward. At times, the growls disappear and there is a slightly punkish edge to the vocals. The equally misanthropically titled "Pull the Plug" starts out as a slow metallic burner before smashing you in he face with crushing guitar riffs and manic drumming but Insurrection know that all out speed is heavier when it is mixed together with slower parts rather than pummeling you straight in the face, Insurrection take a step back before delivering killer blows and this is more effective over all.

"Le Prix a Prayer"is catchy death thrash due in part to seemingly basic drumbeats although the tempo of the song changes a number of times and the chorus to this track is very much in a sing along style. It's one of those tracks that you just know will go down well with a live audience. In "Eulogy of Hatred", there is a definite nod in the guitar playing to fellow Quebec band, Voivod and the narrated parts also give a similar vibe to Voivod's late 80's output but the growled vocals keep Insurrection well within death metal territory.
"Parasite"starts out damned fast with loud growling but slows down so some technical guitar playing can shine through although the entire band continue their death metal assault of the senses. The guitar on this track is reminiscent of 80's Coroner and Believer There's a lot of metallic crunch that crosses death metal with thrash metal in "Le Pesant Dór"and "Misere Noire".

While the vocals on this album are mostly growled by Stef Jompe, they are clear so it's not too difficult to make out many of the lyrics, which makes a nice change from the generic incomprehensible cookie monster vocalists out there. The guitar playing is technical and the drumming is often manic with tight changes. Insurrection are clearly one tight unit. Using metallic force "Extraction" hits the mark and should come with a warning sticker that the album may well remove body parts.

The Small Takeover on Facebook
at September 27, 2017 No comments:
Email ThisBlogThis!Share to TwitterShare to FacebookShare to Pinterest
Labels: 3.5/5, Death Metal, Insurrection, Thrash Metal 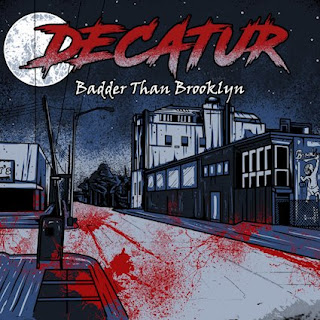 Sometimes a bio just lets you know what you're in for. Toronto-based Decatur were recommended for fans of Metallica, Pantera, Slayer, Lamb of God, Killswitch Engage and In Flames. Right off the bat, there's a problem here. Metallica? (which period-thrash metal or their first major music video period, dominant snare drum period or ....?), Pantera (OK, same problem but most people only know the Phil Anselmo era). The bio also states that Decatur play real metal for metalheads but later it's stated that they get their unique sound be being open minded to other genres such as blues, rock and roll and even pop.


There are plenty of chugging riffs in "Internal War". It's now clear that the Metallica influence is from their thrash metal period and the vocals are Phil Anselmo style shouts. An 80's style thrashing intro opens "Into the Night" and the band sound great until the vocals kick in. They are nice and clear but the vocalist sounds like he has been chain smoking Malboro and Camel cigarettes since coming out of the womb, which would be great if Decatur were a death metal band but they're more in line with retro-thrash. There is, however a great guitar sound, which is close to being a constant throughout this album but more about that later. The opening to "Vegas Girl" borrows liberally from Pantera's "Walk" and descends into hair metal territory. Maybe this is an intentional tongue and cheek parody of Motley Crue's "Girls Girls Girls" and the singing is supposed to sound like an off-key Vince Neil with a nose and throat full of mucus. A relief comes in the form of Metallica style riffs in the next track "Worst Enemy" and the vocals edge towards Martin Walkyier but sadly miss that mark. This band who claim to play metal for metalheads open the title track of this album with a Sex Pistols riff then go thrash metal. On this tune the vocals fall somewhere between Lemmy and Rob Flynn. 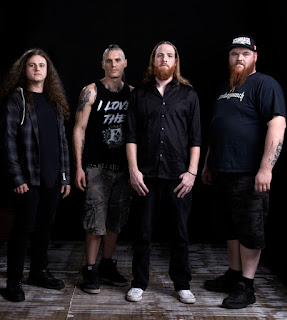 "Bottled Inside" is some mighty fine thrash but for the most part the vocals sound like they're being read for an audio-book after the narrator just came home from a night spent boozing it up. "Tear You" opens with the lyrics, "I just can't take this". I know what the band mean. Actually they get back on track and lay down some righteous thrash here but there's still a mismatch between the song's tempo and the vocals. "Abbaddon" is some fine thrash but there are products you can buy to solve constipation and they could have saved this track. "Shatterproof starts out as a mid-paced metal tune with shouted vocals and then Decatur turn out some tight thrash. The final track is called "Internal War pt. 2" and sounds about as original as the title and pretty much like an instrumental by the band that title reminds you of. This is the best track on the album because it not only ends the album and thankfully, there are no vocals.

There's no way this album is getting post-review play. Brooklyn must be pretty bad.