After over a year off for various reasons, we have returned solely because we wanted to review the new Beastwars album. I really wanted to review this as I was at this band's debut album release show in their hometown back in what now seems like many years ago.

If you're unfamiliar with the band common reference points are early Soundgarden (by that, forget Superunknown and anything afterwards),early Mastodon (pre-Crack the Skye) and High on Fire but as far as this listener can tell Beastwars have for the most part put their own spin on sludge. This is a reunion album of sorts which means it could easily be forgettable like the final Soundgarden album, what was it called again?

On this album, Beastwars initial call for attention is entitled "Raise the Sword", and they sound like a band ready for battle, which is fitting since frontman Matt Hyde was battling lymph node cancer before this album. The song is slow with an early Soundgarden dueling the Jesus Lizard sound and you have to give a New Zealand band huge props for using a very fitting Bruno Lawrence sample from the New Zealand dystopian movie, The Quiet Earth. "Wolves and Prey" is one of those songs that the word sludge was invented to describe. It sounds like the musical equivalent of a concrete mixer's end result before drying and it's the kind of heaviness you get stuck in and have difficulty escaping in a hurry. "Storms on Mars" shows that Matt Hyde can do much more than just roar although he also does that here, this song sees getting tuneful and able to carry a melody (although if you're familiar with their song, Iron Wolf you would have known that he possessed this ability). Beastwars really build an oppressing atmosphere and the entire band changes tempo a few times in this song using a quiet/loud soft/heavy dynamic combined with the sheer emotion conveyed vocally make it one of the highlights of the album.

The early Soundgarden worship is incredibly strong in "Omens". It runs a little too close to the original for my liking and detracts from Beastwars' own musical stamp on sludge. Hyde's vocals on "Sound of the Grave" evoke a haunting feel as he takes a much more melodic approach yet manages to sound like he has risen from the grave. A lot of death metal vocalists are going to go green with envy. At the beginning of "The Traveller", Matt howls over a guitar are reminiscent of blues players like Howlin' Wolf. The song is shortly pulled back into the modern world of music and the slow building tempo changes lend the tune motion. 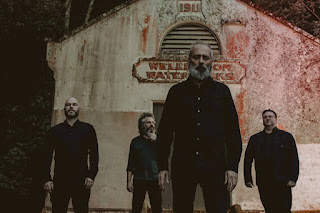 The piano in "Like Dried Blood" will take a number of listeners by surprise as it takes nothing away from the musical heaviness and aids in weighing down the sheer heaviness of the subject matter of the song. Relax though, Beastwars haven't turned into Ben Folds Five as the heaviness is turned up more than a notch around the mid-point of the song where the guitars just about drown out the sound of the piano.

"IV" is not only a strong comeback album but a strong album overall. "Storms on Mars" is the song most likely to hook new listeners in and it is baffling that it wasn't released as a single rather than the early Soundgarden alike, "Omens". IV is definitely designed to be listened to as an album with three slower somber songs concluding the album you just know that thought went into putting the songs in order. I'm crossing my fingers that I get to see the band live the next time I'm in New Zealand.

Edit: A little over 12 hours of writing this and the band released this video for "Storms of Mars".