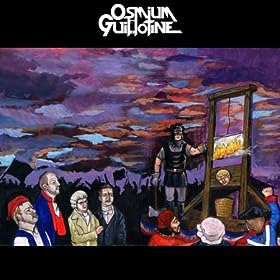 Ever watched any episode of Doctor Who? The British doctor travels in a phone box through time and space. There are many options to capture the feeling of time and space travel through music. One option is to check out older albums and close your eyes and imagine traveling through space and also picturing the time the album was released. Another option is to pick up a new album by a new band covering old ground. With metal, this is easy with retro-thrash and death metal bands playing the old-school style.

An obvious comparison to make with Osmium Guillotine and Doctor Who is the fact that they're both from the United Kingdom. Osmium Kingdom have their feet partially entrenched in the New Wave of British Metal however there are also elements of the original wave of thrash metal so the band's music voyages through metal's past despite being in the present. The vocals of Pete Keleris are of the clean and clear variety with no high pitched screaming. The drumming and bass playing are solid throughout the album. Lance Steele's guitar work really shines through whether he's soloing or Osmium Guillotine are playing as a unit.

The instrumental opener with its quiet build really gives no indication of what's to come but still works as an attention getter like a first song should. The follow-up tune "Martydom" let's the listener know that Osmium Guillotine mean business with their crunching riffs and quick rhythm that brings both early Maiden, Metallica and Anthrax to mind. Opening with a very traditional British metal sound, "D-Day" then becomes much faster paced with the guitar and bass reaching slamming speed. There is a slight hint of Joey Belladonna in the vocals on "Phobophobia" which could be due to the song's near blistering pace. Those who ran screaming when Metallica released the Black album will want to skip "Blight Upon Mankind" due to its slow tempo. "City of Chaos" however will bring a smile to thrash metal fans face. "Hobgolin" opens with a spoken part then the metal is slightly folked up. Whether it is done knowingly or not "Breathe it in, Son" recalls the early days of the crossover between metal and hardcore as there is a riff that is very similar to D.R.I.'s "Five Year Plan".

The only gripe with this album is the song "Subhuman" is too long. There's enough variety between the songs for multiple listens. Osmium Guillotine have released a very good debut album and are a band definitely worth keeping an eye on. Click on the bandcamp link below and give the album a listen for yourself.