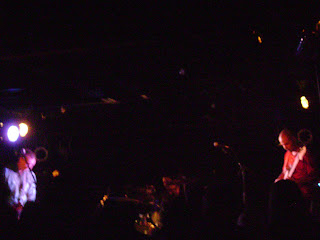 While waiting for the first band to start playing I was talking to a long-time Flipper fan who expressed surprise that the audience being made up of many in their twenties and possibly younger rather than the over thirties. I'm not sure what I make of that myself. It's been quite some time since the days when Kurt Cobain donned a Flipper T-shirt. Perhaps Flipper are a prime example of a band gaining a live audience miles from their home country due to the mp3 buying/downloading crowd.

First up were Dunedin trio Mountaineater who made me ponder what early Gordons shows were like. Mountaineater had a HUGE wall of noise bringing the previously mentioned band and Spacemen 3 to mind. The sparsely used vocals were not unlike The Cure's Robert Smith in his prime. They played about six songs. 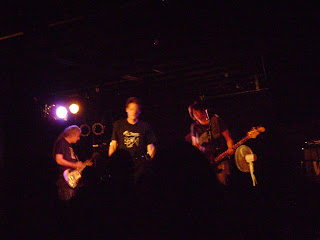 Flipper came out and Bruce Loose started talking about his band not being serious rock unlike the previous group and finding himself trapped in a cage again. Ted Falconi stood pretty much in the same place all night while strumming his guitar. The bass player and frontman moved around a lot but it's like contrasting ADD kid on speed and caffiene with a turtle. Bruce had to check his bass player's glossary (set list) a few times. Into the band's second song he states, "Fuck all those heavy stoner bands (a reference to support band Mountaineater's sound perhaps?). Acid punk is where it's at. We're the original acid punk band". Songs like personal favourite "Life" are played as are newer less engaging tracks. It's difficult to tell if Bruce is genuinely annoyed at the kid knocking the monitor or whether it's part of the band's confrontational approach. I find myself thinking about live footage of The Birthday Party I saw a good many years back as there's a similar dramatic aspect. Bruce claims to have lost his voice and asks for a couple of audience members to sing "Sex Bomb Baby" as he straps on a bass. Two young guys are happy to oblige. No encore is played. 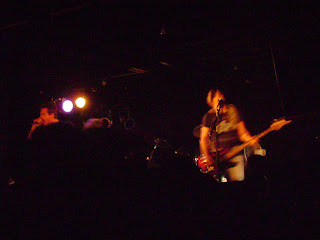 at June 23, 2009
Email ThisBlogThis!Share to TwitterShare to FacebookShare to Pinterest

Bruce never had a great voice, but he used to sound like he gave a shit. This show sounds even more half-assed than the new album!